But now that I have your (not so well earned) attention, I would like to make a little announcement on the topic of books.

Ever since Girl on Demand took down her PODDY MOUTH blog (an honest shame) I've received several requests to review POD (print on demand) books. I usually turn down such requests, preferring to read either screenplays or unpublished book manuscripts.

So, for all you self-published writers out there looking to get the word out and share your writing with the world, the Unsung Critic has finally heard your plight.

If you wish to submit a POD title for possible review, email me with a query or synopsis. If I agree to read it, you must send it to me in the form of a PDF or ebook. (In order to remain anonymous, I can not have things mailed to me.)

Should enough interest come from POD authors, I'll see if I might feature some book writing contests in addition to screenwriting.

Posted by THE UNSUNG CRITIC at 12:03 PM No comments: 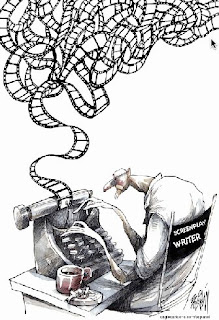 Keeping up with the number of submissions is a little harder than I thought it'd be, so after lagging behind these last few months I'm happy to say I'm now finally caught up. I've read every script sent to me so far.

Some of you I've emailed privately, sharing some suggestions and advice. If you haven't heard from me and want to confirm that I've read your script, shoot me an email and I'll get back to you ... though I probably won't have time to give you specific feedback, or explain why your script may not have been chosen.

For those of you who sent me more than three queries or scripts, I've only reviewed your first three. I did this in the interests of the contest and to save time. Once the contest is over I'll take a look at the rest of what you've sent me. Same thing goes for book manuscripts.

We're already into the latter half of 2007, and so far I've only selected one script for review and cited five others for "honorable mentions". Why, you ask? Because I'm trying to be more selective in what I do and do not review.

On this note, I can not stress enough how important a script's opening pages must be! Remember, most script readers will toss a screenplay aside if they're not hooked into it by the first three to five pages...so if your script's brilliance doesn't reveal itself until the second or third act, it's more than likely they'll remain unread.

By contrast, if I read a script that starts out strong but bores me in the middle, chances are I'll still read it to its end. Again, first impressions are everything.

So...do yourself (and your scripts) a favor and make your openings clear, concise, and to the point. Don't waste your first two or three pages showing your main character as he or she wakes up in the morning, or looks at their reflection in a mirror, or drinks their tenth shot of whisky in a tiny, dingy bar. Those kinds of openings are not very original, and damn near sleep-inducing to a reader.
Posted by THE UNSUNG CRITIC at 4:24 PM No comments:

I’m still sorting through submissions. Every time I think I’m almost caught up, more and more queries pop up in my inbox. So I’ll just level with you on two things.

First, I won’t say I’m down to less than ten scripts to read. Though I am. At this moment. But I will say that I’m almost completely worn out. You’re gonna hate me for saying that, I’m sure.

Second -- and you’re all gonna hate me for saying this, too -- no script since BORN IN THE RAIN has really knocked my socks off. (That’s tough to do. I’m a guy who is very attached to his socks.)

But some of what I read I really enjoyed … so it’s only proper of me to make note of them.

THE JEWELLER’S WIFE was one of my favorite scripts of last year, so when David Shailer offered to send this follow up to me, I eagerly accepted. His second script was also very well written, but there the similarities end.

THE WINTERTIDE SPIRIT is a 19th century ghost story as seen through the eyes of a child. This is no horror frightfest, but a charming tale about friendship mixed with a little supernatural happenings here and there. I would have liked more emphasis on the ghost story, but on its own terms I enjoyed the script quite a bit; it's atmospheric and well fleshed out.

In the spirit of the best of Jerry Bruckheimer (c’mon, his stuff’s not all bad…BLACK HAWK DOWN, CRIMSON TIDE and ENEMY OF THE STATE were pretty kick ass, don’t ya think?), BILLION DOLLAR RANSOM is a contemporary military action/thriller involving a botched rescue attempt of oil workers kidnapped by terrorists in the Middle East.

With everything going on in the real world, this, er, Hollywood kind of story treatment feels a bit too G.I. Joe for my liking. But even if it isn’t my cup of tea, Graham tells a compelling story, crammed with oodles of military technical details and written with a strong understanding of structure and style.
Posted by THE UNSUNG CRITIC at 4:39 PM 1 comment:

For those of you interested in submitting to the screenwriting contest, two important updates:

First, I've now decided to extend the deadline to SEPTEMBER 30th, 11:59pm PST. This gives me more time to play catch up, and hopefully will allow more writers to send their work!

Second, I must regrettably limit the number of entries to NO MORE THAN 3 SCRIPTS PER WRITER. Some of you have sent me literally eveything you have, and while I appreciate your enthusiasm, I simply can't get through it all. So if you have several scripts under your belt, send me what you feel are your three best!
Posted by THE UNSUNG CRITIC at 12:46 PM No comments: